The official guide to making the Node-RED editor and Node-RED runtime communication a two-way street with open-source ...

The official guide to making the Node-RED editor and Node-RED runtime communication a two-way street with open-source node. 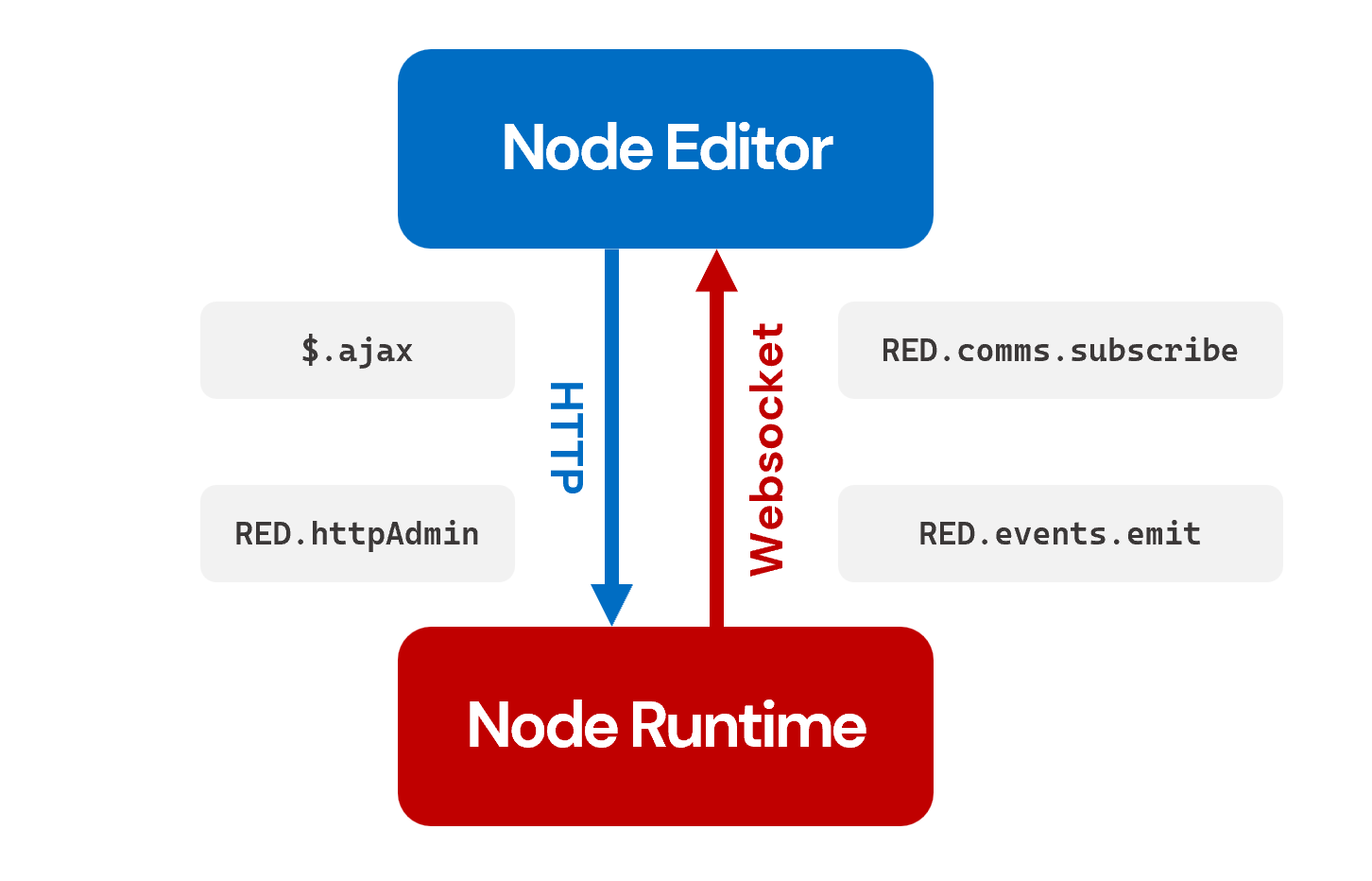 How can this communication be accomplished? The answer lies in a few undocumented APIs... caveat emptor, because these APIs are undocumented, it is possible that they might change without notice in the future but, as far as the author can surmise, these APIs have been stable for quite a few versions, and the functionality that they unlock is worth the (estimated small) risk of having to change the code of a custom node to support newer Node-RED versions.

This communication can be achieved by creating an HTTP endpoint in the node runtime and making an HTTP call to that endpoint from the node editor. The HTTP endpoint may be created using routing APIs of Node-RED's runtime Express app, exposed to the node's JavaScript file by RED.httpAdmin. All Express' routing methods are available, and authorization middleware may be implemented using the RED.auth.needsPermission API if a given endpoint needs to have specific restrictions.

A fairly complete example of how to create a POST HTTP endpoint is in the inject node: 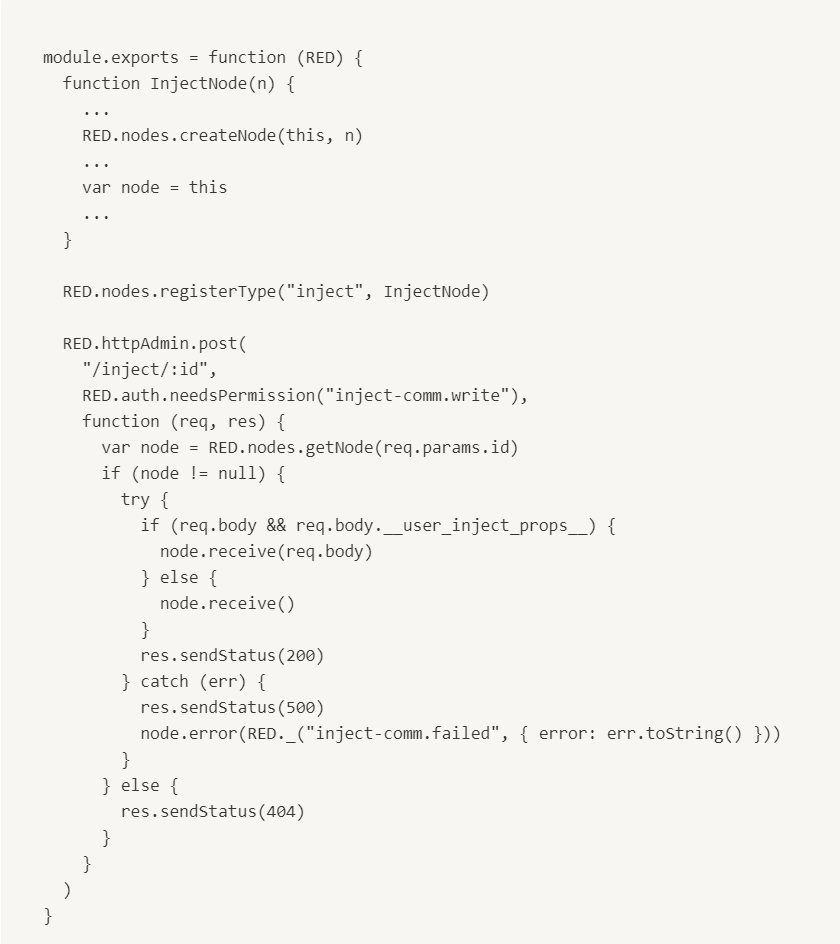 This API call creates an /inject endpoint, which takes an Express route parameter id, meant to be the node ID, and is only accessible with appropriate write permissions specific to this node type. The RED.auth.needsPermission call may be omitted if no specific restrictions are needed, thus the API call would have only two callback functions, as in:

The inject node code snippet also shows how to access the route parameters using the req.params object, in this case to get a specific node's runtime object via the RED.nodes.getNode Node-RED runtime API. Getting a node's object allows for sending input messages to it via Node-RED's node receive API.

On the node editor, the HTTP endpoint may be accessed using jQuery's ajax API. The relevant code parts in the inject node's editor are: 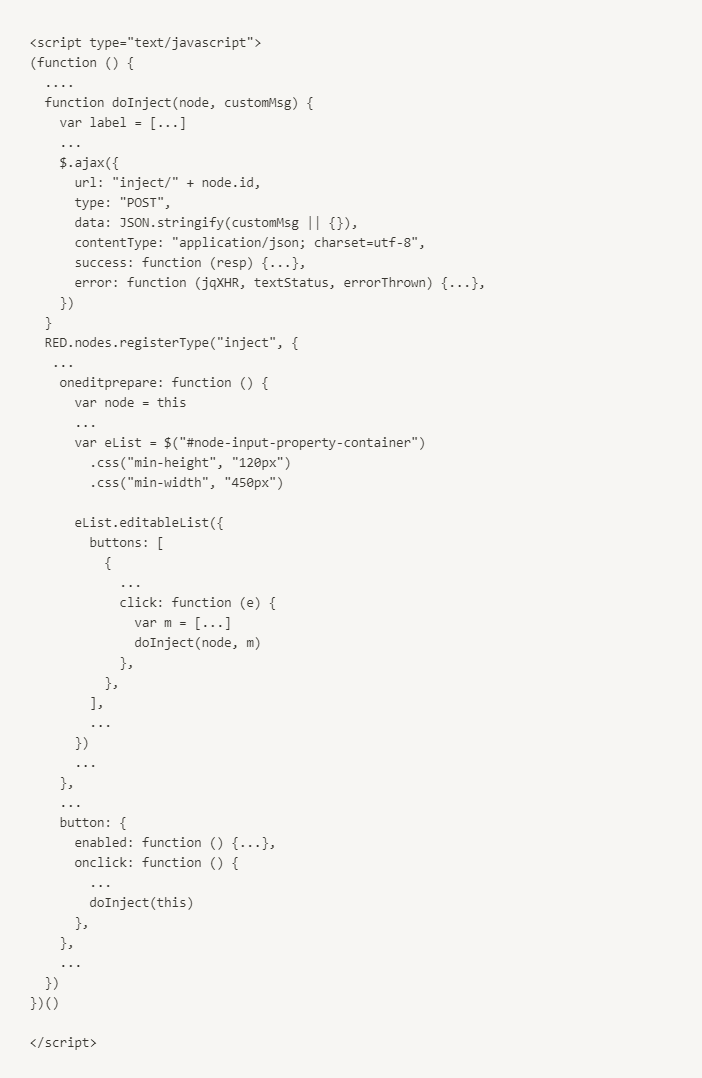 The HTTP POST call is done in the doInject function ($ is the traditional identifier of the jQuery() function), where the node object contains the node ID, which is used in the URL.

This direction relies on the WebSocket that Node-RED's runtime maintains with its editor. The Node-RED runtime RED.events API is used to access this functionality. The downloadfile node runtime shows an example of this: 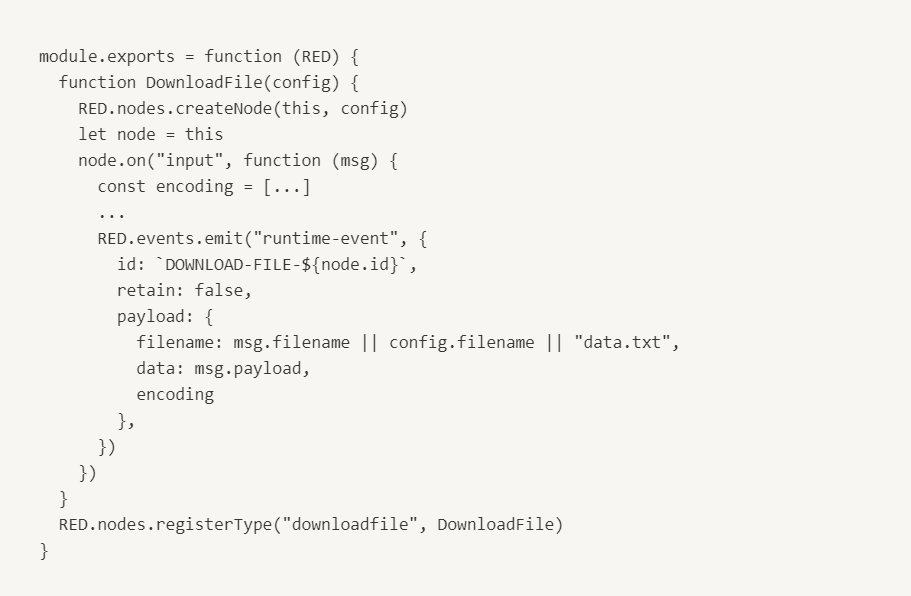 On the node editor side, an event listener can be instantiated using the RED.comms.subscribe API. This API has two parameters, the topic to subscribe to, and a callback to be used when a message with the subscribed topic is received. To subscribe to runtime-event events, the downloadfile node uses the notification/# topic, which captures all runtime-event events. The appropriate topic coming from the node runtime is then filtered and acted upon, in this case a browser's file save dialog opens, giving the user the ability to save messages from the editor to a local file system. 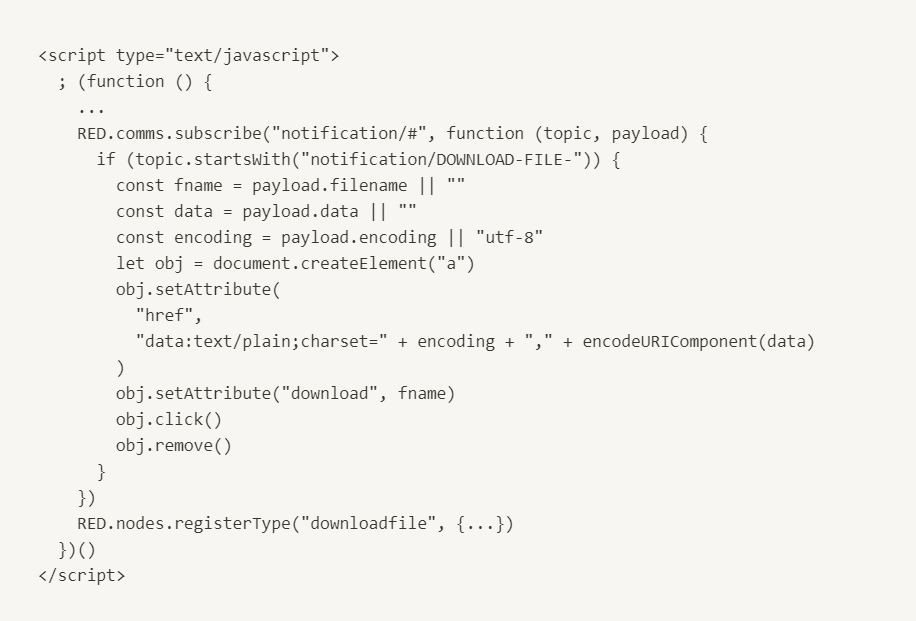 To watch our video tutorial:

How to scale Node-RED with Prescient Designer

Do you need Image Classification in your IoT project? Here's an easy way to develop a simple image classification application using Node-RED packages.