In today’s technology landscape, nearly every technology solution is built on open-source technology frameworks. Long gone are the days when open-source frameworks were regarded as “immature” or “unreliable”. This is because popular frameworks today are used and contributed by massive numbers of organizations across the globe and are likely much more reliable and feature-rich than proprietary software.

Node-Red as the foundation for IoT application development

For enterprise IoT application development, a popular open-source programming software is Node-Red. It is used by thousands of engineers and developers, and it is adopted by major corporations including IBM, Siemens, Samsung, Intel, GE, Fujitsu, Schneider, Cisco, and Hitachi. It has a strong open-source community which has contributed thousands of solutions ranging from MODBUS to machine learning. Furthermore, Node Red is built on Node.js, which is a Javascript runtime used by more than 98% of Fortune 500 companies and is one of the most powerful, reliable, and battle-tested software in existence.

Node-Red is a standalone software and it needs to be installed and maintained per each individual edge device. This means that if a customer installs Node-Red on a few dozen devices and needs to update the application on these devices, they would have to update each device individually. This is impractical and for this reason, Node-Red is typically limited to small-scale deployment.

Prescient Designer is an enterprise-class IoT and data analytics platform built on Node-Red.  It aims to provide scalable, reliable, and secure IoT solutions on top of the powerful low-code programming capability Node-Red provides.

A strong open-source ecosystem fosters standardization and growth. For any organization that looks to adopt technology solutions including but not limited to IoT, it is advisable to adopt such an ecosystem as the foundation. 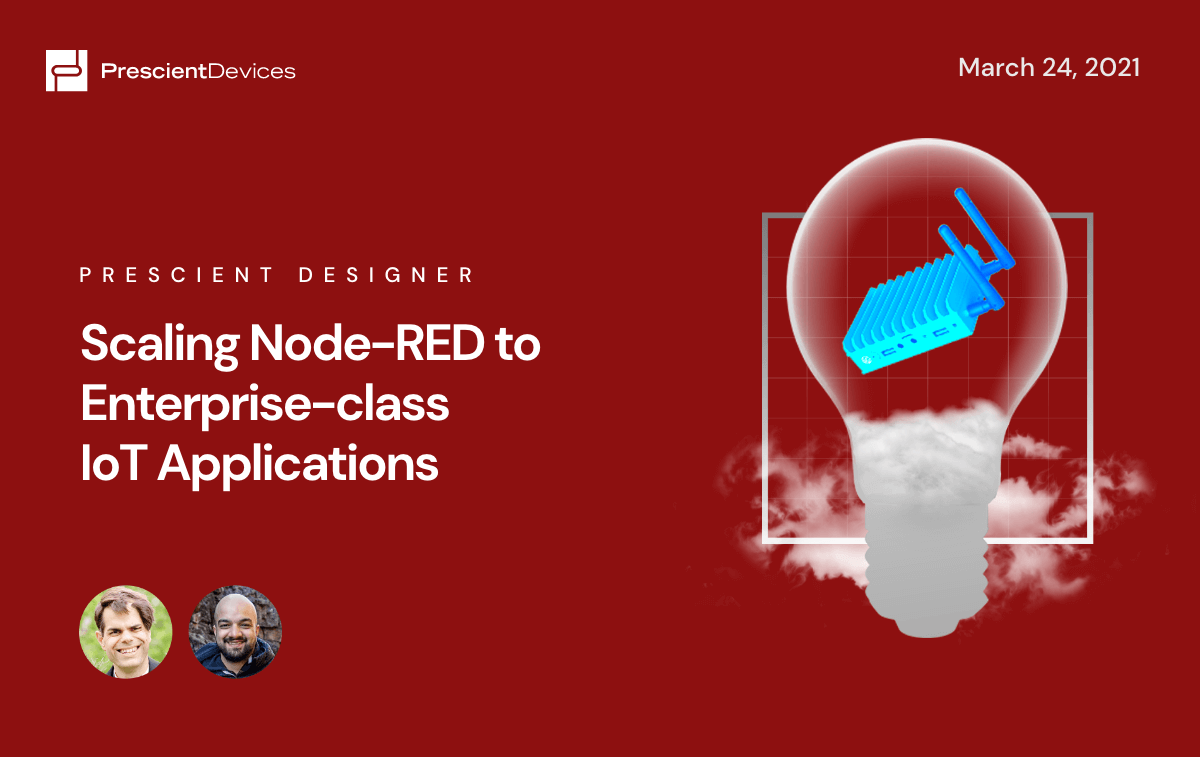 Register for our upcoming webinar to understand how you can leverage Node-RED to accelerate your IoT development to solve real-world problems. During our webinar, "Prescient Designer: Scaling Node-RED to Enterprise-class IoT Applications" on March 24, we will show you how you can build, deploy and manage scalable IoT applications easily with Prescient Designer. Register here.

To learn more about Prescient Devices and how we’ve leveraged Node-Red to build a robust IoT Design Automation platform, visit our website.

We partnered with Bosch Rexroth ctrlX AUTOMATION - The future of Industry 4.0 | Prescient

What is a Distributed Data Pipeline and Why Is It the Future of Data Engineering? | Prescient

A distributed data pipeline works with data from multiple sources, in multiple formats, and processes data early to allow for better data insights.